Tallymoore aims to breathe new life into Irish folk favorites. They are best known for their strong vocals and complex harmonic treatments of tunes, along with rich instrumentation. Their innovative arrangements of classic tunes have made them a favorite among festival goers. Their vocal harmony blend, distinctive arrangements, and strong musicianship have distinguished them on the Irish music scene.

“One of the bands on this front is Tallymoore. They’ve weaved together a unique sound that is new and old at the same time. Beautiful vocal harmonies mixed with folk instrumentation at its best.”
-Barry Stapleton, Entertainment Staff; Milwaukee Irish Fest 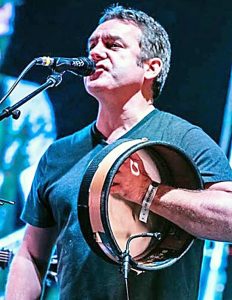 Ian Gould, an immigrant from Belfast, began his musical career as a kid playing in bands throughout Ireland and Europe. Ian is now a solo artist and a singer/songwriter. He has been performing internationally for more than 20 years.

Although he is still a continuous traveler, Ian now resides in Milwaukee, WI.  He is a solo artist popular throughout the Midwest. “I’m fortunate to live where I live, because the Irish scene is vibrant.”

Ian was recently nominated for the “Top Solo Performer in a Pub Venue throughout the USA, Ireland, European Union, and the  United Kingdom. In 2012, Ian was invited by the President of Ireland, to perform for him and for Irish and British diplomats, at the President’s official residence, in Dublin. In 2016, Ian was nominated for “Best Acoustic Musician” for Best of Milwaukee.