Tickets and Show Info Below 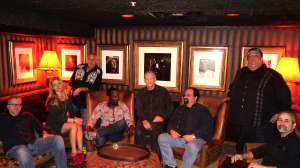 Regular artists at House of Blues-Chicago, The Blue Olives from Madison have performed their mix of blues, funk, and classic rock at over 3500 shows nationally. Known as one of the fiercest jam bands around with a huge repertoire, they’ve been described as “tight enough to be professional. yet loose enough to be really fun…” Expect intricate horn lines, tight vocal harmonies, searing guitar, a seriously funky rhythm section, plenty of improvisation, and a really good time.

Learn more and listen at The Blue Olives website

A freelance musician for more than 20 years, Ross Catterton attended Lawrence University in Appleton, WI where he studied saxophone. A versatile musician, Ross also plays guitar, piano, drums, and sings. His influences include classical, jazz, funk, hip-hop, R&B, alternative, Latin, and pop/rock. While he’s played across the Midwest and in Europe – including being an opener for Rusted Root and Ludacris, he currently plays in five groups around the state. Aside from performing, Ross has released five albums and is composing and recording number six.