(Your seat will be assigned ahead of time. No need to arrive early)

Concessions will not yet be available for this performance

Dana first tried stand-up as a college student, and has been self-deprecating and discussing sort-of-but-not-quite-adulthood on stage ever since. Based in Milwaukee, she has performed at the Milwaukee, Floodwater and Great Spirit Comedy Festivals, and opened for Todd Barry, Hari Kondabolu, Dan Soder and Charlie Berens. She’s also sorry she hasn’t watched that t.v. show you recommended, but she just has, like, a lot going on right now. 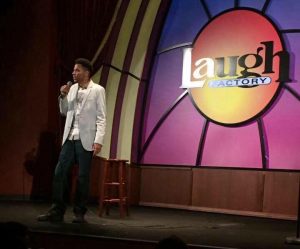 Anton “Ton” Johnson uses his comedy as a platform for the outraged common sense we all keep inside. Based in Milwaukee, Ton is quickly making a name for himself throughout the Midwest after winning several comedy competitions, participating in festivals, and opening for touring headliners in various venues.

AJ is a standup comedian currently residing in Milwaukee, Wisconsin. An Iowa native, AJ started his comedy journey at the age of 21 while attending college in Iowa City, Iowa. After moving to central Wisconsin to finish a meaningless bachelors degree, AJ continued to develop his craft working clubs, colleges, and bars all before graduating from college in 2015. AJ Returned to Iowa and won the 2016 Penguins Comedy Club ‘Funniest Person in Iowa Contest.’ He has performed at festivals all over the country including the Altercation Comedy Festival, Cape Fear Comedy Festival, and the Memphis Comedy festival. His comedy is a mix of humorous personal tragedy, silly wordplay, sprinkled with the occasional rant about respecting large bodies of fresh water.