SPONSORED BY A GENEROUS DONATION FROM

BUY TICKETS IN PERSON AT:

It all began with a simple goal: to play and help revive American roots music. Asleep at the Wheel landed a gig opening for Alice Cooper and Hot Tuna in Washington, DC, in 1970. The band’s big break came when Van Morrison mentioned them in a 1973 interview with Rolling Stone “there’s some relatively unknown group around that I really dig. Asleep at the Wheel, they play great country music.”

The record offers started coming in and The Wheel got rolling. The musicianship of Asleep at the Wheel has become the stuff of legends. Reuters pegged The Wheel as “one of the best live acts in the business.” The band has constantly toured at a national level and the alumni roster, with more than 80 members, includes an impressive list of musicians who have gone on to perform with artists such as Bob Dylan, George Strait, Van Morrison, Lyle Lovett, Ryan Adams, and many more. A quick scan of awards, such as “Touring Band of the Year” (CMAs, 1976) and “Lifetime Achievement in Performance” (Americana Music Awards 2009), not to mention near dominance of the GRAMMY “Country Instrumental” category over the years, reflects the reputation of the band’s musicianship. 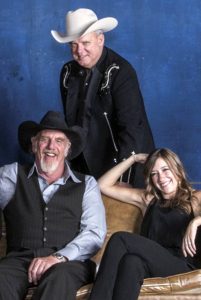 Band member Eddie Rivers – also known as Mark Malak – became the longest-serving steel guitar player in the storied history of Asleep At The Wheel. During his career, he appeared in more than 40 commercial music releases and toured in all 50 states, Canada, and beyond. After raising his family in Beaver Dam, Malak relocated to Austin, Texas, to join the band. But his roots are still planted in the community. Beaver Dam High School recognized Malak with an Outstanding Alumni Award in 2020.